Gary Gulbranson and Pete Talbot interview our son Sandeep Thomas in a two part series on AM 820: The Word (KGNW), Seattle, on Nov 17 2020

Part 1: Here Sandeep shares about his broken past, and the circumstances surrounding his decision to submit his life to the Lordship of Jesus Christ.

Part 2: Here Sandeep shares how families that are struggling in the journey can seek support in Jesus and through a caring Christian community.

Part 1: The focus is on children 3 years and older. Here we talk about (a) The effects of trauma on children. (b) The grief and loss they face. (c) The importance of their attachment to their caregivers, (d) The social and emotional implications they need to deal with. (e) The developmental delays they have to overcome.

Part 2: The focus is now on the parents. Often parents themselves suffer from secondary trauma which can effect them mentally, emotionally, physically and behaviorally. Parents may need to seek professional help, but ultimately true healing only comes from Jesus. It is worth it, because God Himself adopted us.

The Gospel Coalition – As Adoption Ages: How Parents Are Handling Teen Challenges

There was really a significant reawakening of the historic Christian role of caring for orphans in the mid- to late-2000s. This included the adoption of many children coming from orphanages who’d experienced significant deprivation or trauma. Those kids are now hitting their teen and early adult years. This is an article in The Gospel Coalition website, published in July 28th, 2020. 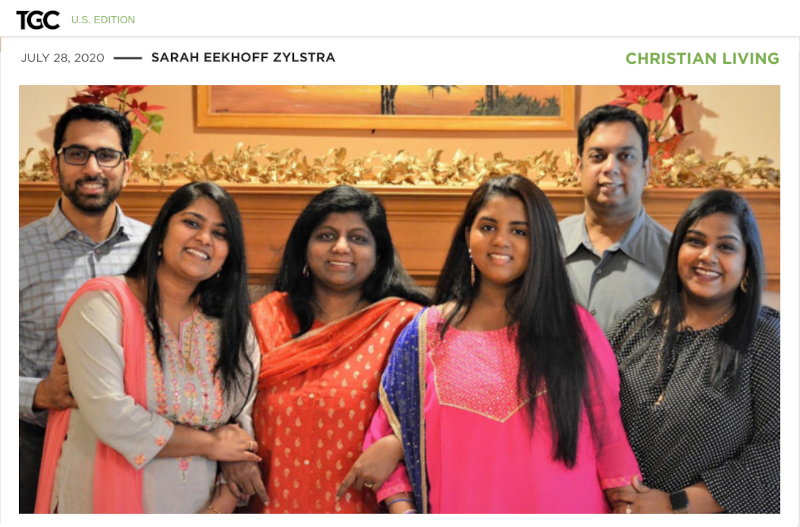 A Bio Siblings Journey – Joy Comes In The Morning

Think Orphan – The Beauty and Brokenness of Adoption

Suja Paris – Voices of the Community

The story of our son Sandeep as he shares his adoption journey at the Refresh Conference, Seattle in 2016. It is a story of how God can take a child with broken beginnings and transform him with the love of Jesus.

This is a deeply moving set of clips which helps us look inside the minds of foster children, and understand why they sometimes act up. The first two clips are the story of Zoe, and they show what the affect living in broken and abusive homes can have on her and her younger brother. It also helps us understand what the insecurity of being moved from place to place does to children. And worse, how their hearts are ripped into shreds when they are separated from their siblings. This story also shows the tremendous difference a caring foster parent can make. The third clip is the story of little Kevi, and shows us the challenges he faced from separation with his Mom. These clips help us understand the plight of vulnerable children better.

When a couple decide to start a family, they are inspired to pursue adoption through the foster care system. They feel like wonderful, altruistic people until they suddenly have three wild kids in their home. Watch the trailer for “Instant Family” released on November 16th, 2018. We strongly recommend this movie for the insights it can give about adoption and foster care. This is a trailer for this highly recommended movie.

This is an excellently produced TV adaptation of “Anne of Green Gables”, the beloved classic written by Lucy Maud Montgomery. It is a story about an outsider who, against all odds and many challenges, fights for love and acceptance and her place in the world. Set in Prince Edward Island in the late 1890s, the series centers on Anne Shirley, a young orphaned girl who, after an abusive childhood spent in orphanages and the homes of strangers, is mistakenly sent to live with an aging sister and brother. Over time, 13-year-old Anne will transform the lives of Marilla and Matthew Cuthbert and eventually the entire small town in which they live with her unique spirit, fierce intellect and brilliant imagination. Anne’s adventures will reflect timeless and topical issues including themes of adoption, identity, bullying and prejudice. This is the official trailer for the series, that is airing on Netflix.

What I Wish You Knew About Parenting a Child With RAD

Effects of Childhood Trauma in Adulthood

Self Care Isn’t Enough when you Parent Complex Kids

Adoption and the Destruction Biological Children

How Adoption Destroyed My Life

Setting Limits with a Your Adopted Teen

Nominations for the Meanest Mom in the World

Homemaking in Light of Eternity

The Unspoken Pain of RAD

Adoption process in India as of May 2016

Feeling Worthless as a Mom

How to Face Rejection

Dear Adoptive Parents walking the hard, hellish, lonely road of trauma…THIS POST IS FOR YOU. And ONLY YOU

MARRIAGE in the TRENCHES

A Mom’s Mental Health is Everything

Trauma Training for Caregivers of Vulnerable Children in their countries

“People Don’t Get It”: Trauma and Attachment

Hank Fortener’s Challenge – A Family for Every Orphan

How to Help Adoptive Families

Why People should care for Adoptive Families

The Mantosh Inside Me

To Foster and Adoptive Parents in Difficult Seasons

Care and the Church

7 Reasons Adoption is the Gospel