I want to share with you a story about love, grace, and a new life in Jesus! I was born in India. You may not know this, but there are millions of children running the streets of India not going to school. This country has about 17 million orphans. Alcoholism is rampant among the men. And women have no value; it is the 4th most dangerous country for them to live in, due to selective abortion and sex slavery.

My birth parents, siblings and I lived in a tiny 250 sq. ft. home, on the outskirts of Bangalore. My father, an extremely poor and broken man drank daily to forget his pain and wasted away what little money we had. 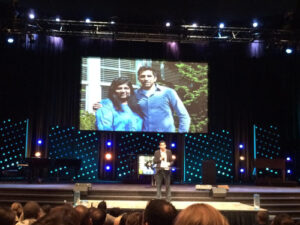 When I was just 5 years old, my mother, in utter desperation, set fire to herself and died before my eyes, leaving me with horrible memories. Many people in India still believe in karma, and my family was one of them. Karma teaches that when something bad happens to a person they are paying for the sins of their previous life, thus deserving of their current suffering. Also, a person with bad karma can pass it on to others. So because I had witnessed my mother dying, nobody wanted to look after me. I felt the horrible pain, loss and abandonment!

Ten thousand miles away, a couple in the States, Peter and Vanita, heard about my terrible family situation, and felt led by God to adopt me, this unwanted, broken child – it was God’s providence. They went through a rigorous adoption process and I came home to them 8 months later! I came to a new culture, needing to learn a new language ,and they gave me a new name – Sandeep, which means light! With all of these changes, the transition was not easy. I was also suffering from severe post-traumatic stress, making adoption a very lonely and difficult walk for us.

As the years progressed, my younger sisters Sneha and Rachna joined our family. I however, became very angry at God, my adoptive parents and my birth father for my trauma and losses. I told my adoptive parents that I would never become a Christian because it did not make sense to me why a loving God could allow my mother to die that way. It was a strong spiritual battle for my soul, because human adoption is a reflection of God’s adoption of us into His family. What do I mean by this? The Bible tells us that because of sin we have chosen to separate ourselves from God so each one of us is a spiritual orphan. But God chose to adopt us into His family through the death and resurrection of His son Jesus – Ephesians 1:4-5: He chose us in him before the foundation of the world, that we should be holy and blameless before him. In love he predestined us for adoption as sons through Jesus Christ, according to the purpose of his will.

God chose adoption before the foundations of the world. He paid a huge price to purchase our freedom – while we were hopeless and lost in sin; Jesus’ died on the cross as payment and He then offers the free gift of eternal life to us. Romans 6:23: For the wages of sin is death, but the free gift of God is eternal life in Christ Jesus our Lord. Similarly, I was lost, abandoned and hopeless and my parents by God’s grace did whatever it took to adopt me into their family. Since I was coming into a Christian home, Satan hated and severely attacked my family and me.

Towards the end of my 9th Grade, Satan’s attacks on me were the strongest and my parents almost thought they had lost me as I was very angry, depressed and rebellious. God in His mercy continued to hold onto them ,even when they were discouraged and tempted to give up, granting them wisdom and grace to love me and put strong boundaries around me. Finally, in September 2009, after rebelling and struggling for 11 years, I surrendered my life to Jesus and found peace and joy for the first time in 17 years! John 1:12: But to all who did receive him, who believed in his name, he gave the right to become children of God.

Looking back on my life, God’s grace has been extremely evident throughout. There have been pivotal events in my life which God has used to steer me according to His purposes. I had very deep anger against my birth father, and I carried the heavy burden of unforgiveness for 11 years. After I surrendered I found freedom, because God gave me the grace to forgive. It was not the new life that my adoptive parents gave me which changed my life, but the eternal life God has given me through Jesus.

My life is a miracle, and the entire glory goes to Jesus. He chose me, He loved me, He provided for my needs, and He carries me through life! I was once hopeless, but today I have eternal hope in Him.

So why am I telling you my story? Because it is an illustration of the gospel. We are all sinners but God in His mercy sent His beloved son to die on the cross as payment for our sins. Today we all have been given the free gift of salvation, and we have a choice to make. My prayer in sharing my story is that anyone who has not found that hope will find it in Jesus.

Below is a my testimony being shared at the Refresh Conference: