“Did you see what happened?” was the greeting I got as I took my toddler to her preschool that clear September morning. My heart froze as I watched the second tower of the World Trade Center collapse on the screen of the TV in the corner of the room. My husband had got on the bus just an hour earlier to get to his work in midtown NYC. Hugging my baby a little one tighter, I rushed to the car and urgently called him to see if he was okay. He told me that his bus was still on the NJ side of Lincoln Tunnel as the tunnels had been blocked off. He proceeded to tell me that he could see plumes of smoke going up in downtown Manhattan and heard that a plane had crashed into the World Trade Center towers.  I was so glad that because of a parent-teacher meeting at our son’s school, he had gone late to work that morning – the reason he was still on the Jersey side. The government  was calling this terrorism attacking America! 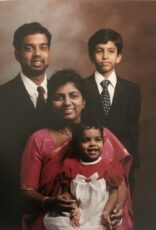 I quickly went to pick up my son from his elementary school and then tried contacting my Uncle and Aunt who were to have left at 8:15am on a transcontinental flight from La Guardia airport in NY to Los Angeles, CA. We had heard by then that all the flights which had been hijacked that morning and used as weapons by the terrorists were transcontinental ones. We fearfully waited until we were finally able to make them contact with them. Thankfully, theirs and all other flights had been grounded minutes after the attacks began. New York was under siege.  A few hours later, after passing through many checkpoints, they drove safely to our home.

By then, we heard that a third plane had crashed into the Pentagon and a fourth had been forced to crash in Pennsylvania because of the bravery of quick thinking, super heroic passengers. We had many friends and family who worked in the city so we spent the next few hours calling and tracking them. Thankfully, everyone we knew survived though some had PTSD from the happenings that day.

That morning of 9/11 changed us all in America forever, more so those of us who lived in the tri-state area. Life seemed to come to a stand still. It was a surreal feeling watching the replays of the towers collapsing on repeat on every TV channel. No one knew what was going on – there was just a pervading sense of gloom, dread and sadness all around us. Our neighborhood came out that evening, shocked looks on every face, with words eluding all of us as we were trying to process what had happened. That weekend, our church was packed and overflowing. People were afraid and knew that some things were above their pay grade so they went seeking after God for answers. It was terrifying to know that the terrorist sleeper cells had existed less than half hour away from our home.

Life did change and we lost the sense of peace and security that we had taken for granted all our lives. Our soldiers were soon deployed to Iraq – America became a nation at war! We were surrounded by death and sadness but also many stories of bravery and courage started to emerge! We did not take life for granted any more. Life was fragile. Our safety and security was unsure. We realized that God was our only strong foundation and our refuge in our times of need.

Twenty years have come and gone since that dreaded day when we lost so much. What lessons can we learn from it?

My heart goes out to the families who have lost loved ones as a consequence of that fateful day. I pray that they have found peace and comfort as they have grieved their losses deeply. I thank God for the protection He provided for my family and friends at that time. I hope that He finds our lives well lived for Him, worthy of this 20 year grace extension He has given us. I pray that we will always remember that only God is in control of the world, only He is worthy of worship and only He is judge of all mankind. We are but mere human beings incapable of running our own lives let alone the world. May we learn to know Him and trust Him implicitly as our futures lie firmly in His capable and loving hands. May we grieve our losses, surrender our fears and then rejoice in our salvation trusting that our God reigns and is in complete control of this world and He has a good plan which will work together for our good when we learn to love Him!

“Now to Him who is able to do immeasurably more than all we ask or imagine, according to His power that is at work within us, to Him be glory in the church and in Christ Jesus throughout all generations, forever and ever. Amen.” Ephesians 3:20-21